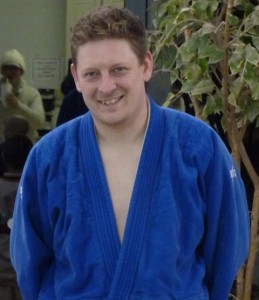 At the age of six, Paul started Judo at Summit Judo club  in 1983 where Len Dunce and Derek Brownett were the leading senseis. At the age of 13, due to his parents moving away, Paul left Summit, only to return at 21 (in 1998) with little brother on tow as an excuse to play Judo again. Since then, Paul has worked up the belts again to become a club coach in 2004 and Black Belt in 2009. These days, he takes lessons for the juniors and seniors on a weekly basis. Paul is now teaching 3 nights a week both at Summit Judo club and at AWE Judo club in Tadley where, after helping out coach Al Coupland following an injury, he took over Al’s role permanently. Since August 2010, Paul has developed his professional contributions to the sport – firstly by starting up Summit School of Judo (which now boasts at least a further 150 students), and secondly by maintaining the role of BJA Hampshire Chair and PR Officer.

Mike attends judo sessions at AWE on a Monday night and is also commonly found at Summit Judo Club on Fridays.  He has been doing judo for quite a while, having developed a thirst for it whilst supporting his daughter with her judo skills. In addition to sensei duties, Mike is also a referee for the BJA.